Train Art
By Ray and Naja

"For my pallet and brush,
A rail,
And a train."

When the object is crushed on the rail it might not be as high as it was, but it is much wider and broader. The Chinese have a saying "a frog in a well" meaning a person who can see very high, but not broadly. When a frog looks up from the bottom of a well it can see the sky, but only a little bit. The height limits its width of perception. Of course the frog thinks that its vision, and opinion of that vision, is the true definition of the sky. When the frog comes to the top of the well, it realizes that in the height of its perception was also the very narrowness of its understanding. When I see the pennies or other objects flattened out it helps me to see where I've been narrow in my insight and feelings.

As a student, teacher, and practitioner of both Eastern and Western Alchemy, where we turn base metals into gold, I am fascinated by the many stages of change and refinement. This is not only in the material world, but more importantly, in the spiritual and emotional world. I see my Train Art as a tangible example of the changing and refining of materials. The penny, plus the rail, plus the train, plus a brief moment in time, affects not only the penny, but the holder of the penny. With the help and creative eye of my partner Naja, we bring you a new way of looking at art, alchemy, and life.

No animals were harmed in the making of my art.

Contact me directly for information about Train Art and purchasing and design. 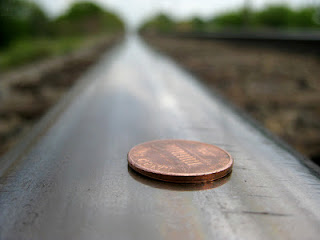 Posted by Ray Hayward at 7:26 AM No comments: 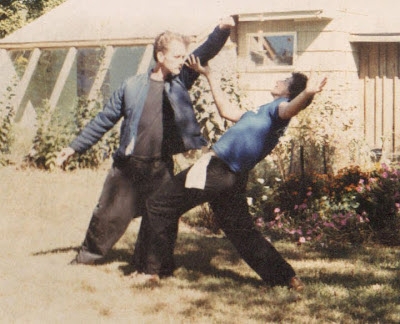 “Personal Development” and the Taoist Warrior

Some years ago, I put together a program of training which combined Taoist Qi and
meditation training with various high-level personal development techniques which were being taught by “success” coaches in the West.

The program became known as “Taoist Warrior Training.”  I ran this program
successfully for several years, and participants informed me that it had a very positive impact on their lives.  Sifu Hayward very graciously invited me to share this brief description with the readers of his blog.

So what IS the Way of the “Taoist Warrior?”…

The Way of the Taoist Warrior is to “Live Large”--finding and following your Bliss-that
which gives you utmost energy and makes you feel most deeply aligned with “the Force.” It is about discovering and respecting your own particular “Internal Economy,” or level of Qi which  makes you feel most resourceful, centered, and energized.

It is about finding your own unique balance of physical, emotional, and spiritual forces
which, focused in powerful synergy, can fulfill your personal “Life Dream”---that sense of vision, purpose, and joy you’ve always had somewhere deep in your soul, and which most ultimately gives meaning to your life.

It is not necessarily about more “success” or “achievement,” though that may come as a
by-product. It is, however, about exquisite health, a feeling of inner power, harmony and
balance, and a feeling of abiding joy and good humor in the everyday real world.

So what does “Taoist Warrior” Mean?

The Taoists were the Sages of China who revered, observed, and followed the total way of Nature, or Tao. Their goal was to achieve a perfect balance in life between their physical energies, their spiritual destiny, and the Tao-or the “Source of the Force.”

Although many Taiji aspirants today deplore the term “Warrior,” the Warrior ideal does
not connote aggression or violent activity, but referred to a Sage who could face all of life’s challenges, even (especially) very unsettling ones, or even life and death combat, with equanimity and centeredness. The Warrior has such a firm center and internal power that s/he can always maintain flexibility and balance even in the most adverse circumstances.

Though the Warrior’s own sense of internal power and integrity is immense (tremendous Yang), in dealing with others, a Warrior is flexible and gentle (Yin). It is this balance of the highest level of both Yin and Yang qualities which makes the true Taoist Warrior.

In the ancient days, the Warriors were usually very multifaceted individuals. Often they
were astronomers, scientists, chemists, physicians, strategists, and protectors of the people.  In our time, the concept can be applied to a well-rounded individual who acts with a sense of unerring inner purpose, yet is always aware of the Larger Picture. And whose primary concern is always to maintain a state of attunement with the Tao or “The Force."

A short story of how this all began…a bit of personal history which will put the idea into
perspective.

All of my life I have been fascinated by the “grand life”—how to live to one’s best
potential while radiating an aura of joy and positive energy. I guess that was my “quest.”
It was a varied and fascinating quest which brought me into fortuitous contact with some
remarkable human beings—martial arts masters, master healers, and people of great spiritual insight from Swamis and Zen masters to Catholic contemplative  monks. . A journey of constant discovery and challenge…

After being a weightlifter and Karateist, Taiji  seemed to me like the ultimate ideal—an exercise whereby one could become stronger through relaxation and which promised “startling stamina beyond the ordinary stages of retrogression and decay.”  A long, healthy life with abundant energy and mental acuity—that was for me!

So I trained and practiced assiduously and had the good fortune to work with some remarkable teachers who totally embodied not only the Taiji  “forms,” but what seemed to be something larger and of even greater value—a kind of Life Strategy.

Unlike many of the martial arts masters of the media, who are often portrayed with a
“macho,” sometimes even sociopathic image, these teachers seemed to embody a tremendous power, but also a genuinely “human touch.” They were people of compassion and absolute integrity, sometimes even puckish, childlike good humor. Yet each of them embodied tremendous inner power as well.

I began to see that the “Strategy” was perhaps even more valuable than the Taiji
exercises and forms. But that the “forms” somehow led to the Strategy. And the teachers would give broad hints about The Strategy, but never seemed to provide any specific details about how to achieve it.

As I continued my studies, I sadly noticed Players, sometimes even highly talented Taiji
and other martial art Players who seemed to lack the Strategy—whose lives seemed to be off center or who were consumed with the very power they seemed so intent on developing. Often they had tremendous difficulties in their financial or personal lives.

So my quest continued…

I decided to look at Western approaches to “Success” and read scores of books, attended
seminars by some of the best known “Success Gurus,” and truly had a ball doing it! There was something expansive and liberating about it all, and some wonderful and very generous people associated with these programs.

Interesting to me, many of the “success” approaches seemed to emphasize Yang energy—be more, do more, imagine more, never give up, keep on affirming and visualizing----until you reach your goal. And then set an even bigger goal and start all over again!Was this “what it was all about?” The contrast between that and the serenity and joy of my Taiji  masters created a question in my mind. Was there perhaps a “softer and gentler way?”

I was immensely surprised by the fact that only a relatively small percentage of people
who attended the “Success” programs really seemed to experience profound changes in their lives. Frequently I met people who, a few months down the road, had reverted to the status quo of their drudgerous lives (as they described them to me) and who remembered the powerful --and usually very expensive seminar-- only as a momentary “high.” For some reason, they just could not follow through, even though they had invested large amounts of time and money.

This truly amazed me—until I realized that the key to ALL life success is ENERGY. Just
energy—the energy to follow through in realizing your dreams. Can you have a creative,
exciting career if you feel tired all the time? Can you have a passionate, vibrant relationship if you’re always feeling “run down?” It seemed that the answer was no, that the single most critical requisite of “success” in any arena of our lives is energy.

So I began to explore Energy.

It was obvious to me from my decades-long study of Taiji and Chinese healing arts that
the Chinese had developed a superlative “technology” for cultivating, harnessing, and enhancing personal energy. After all the concept of Qi was central to all of Chinese culture—not only medicine and martial arts, but even architecture, painting, and cooking! So maybe Qi was the “missing” ingredient to success and even to a truly viable Life Strategy.

As I began working to combine Eastern and Western approaches to the “grander life,” the greatest revelation of all appeared brought by a teacher who pretty much just “showed up” on my doorstep one day when I felt I had hit a dead end. She showed me how to understand the relation between mental intent and the actuality of our everyday life. What we vibrate in resonance with infallibly appears in our life.

Of course, like most people, I had already heard lots about setting goals, focusing the
mind, creating a vision of my life, etc., etc. I all but dismissed the new revelation as just more of the same “old stuff,” when I began to see that what my previous learning had lacked was that mental focus was not enough. Of infinitely greater importance was that one’s inner personal core had to be in a harmonious and precise vibrational frequency which matched whatever we were visualizing or focusing on. And there had to be a feedback mechanism to verify that the match was actually happening. Once I discovered and worked with this “revelation” a whole series of gateways opened up for me.  I had at last found the “softer, gentler way,” that fully unified principles of the Tao with Western approaches to “success” and personal development.

So that’s what this program evolved into—a synergy of Chinese “energy technology”
with state of the art western discoveries in personal development—and all of that joined with the critical cornerstone of it all—being able to sense and adjust our moment by moment vibrational core to be perfectly in sync with real-world daily life as well as our personal vision of the grander life for us.

I am still traveling on my Way of refining  “The Strategy.”