The Eight Postures or Energies of T'ai-Chi Ch'uan 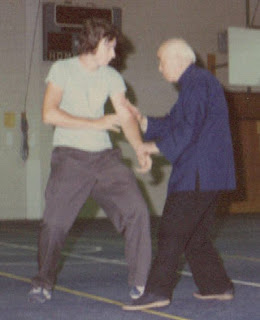 Tai-Chi is composed of eight hand techniques corresponding to the Eight Trigrams and five foot techniques corresponding to the Five Elements. Together these are known as the 13 Postures, and all of Tai-Chi is created and composed from them. They are Ward-Off, Roll-Back, Press, Push, Pull, Split, Elbow, and Shoulder. When I was learning from Master T.T. Liang he called them postures but it was easy to be confused. Was Ward-Off only done the way it appeared in the solo form? What about other styles of T'ai-Chi's Ward-Off? Was that shape or structure the only way to use it? Could I really defend myself using these archaic expressions of what I now know to be vital, versatile, and dynamic energies? Master Liang taught and showed the underlying theory or principle behind each of these postures. For example, how the structure principle of  Ward-Off  showed up in different places such as the brushing arm of the posture "Brush Left Knee and Twist Step" being Ward-Off energy. For my own learning, practicing, and now teaching, I call these the Eight Energies. Really these could be called the eight sensitivities, or the eight expressions. Prof.Cheng taught that the "arms embrace the Eight Trigrams." Each of the eight energies in T'ai-Chi not only corresponds to a trigram, but a direction on the compass. That is why the pushing-hands method using the first four energies is called "four directions." These applications of energy go far beyond the simple expressions in the Solo-Form, Pushing-Hands,Ta-Lu, and San-Shou.

I have been teaching an ongoing class where I instruct and demonstrate the energy, theory, and concept behind each of the Eight Energies/Postures and then show how to apply them in three methods: Single-Hand Horizontal, Four-Directions, and Flower-Picking or freestyle. In April I'll be traveling to the Ming Tao Tai Chi Studio in Delaware to conduct some seminars and workshops, one being how to apply the Eight Energies in three methods. Whether you are a beginner or an old-time player, I know you will get some fresh insights and confirmations on your eight energies in these workshops. 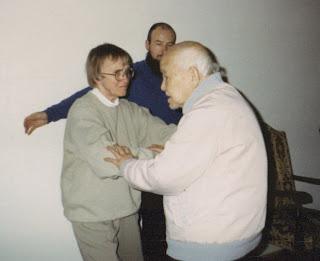