Throughout the many generations of Tai Chi teachers, each generation has given special emphasis on certain postures or movements.  Either for its health giving benefits, martial art application, or spiritual awakening abilities, different teachers have stressed or focused upon a particular movement to be practiced over and over again, above and beyond the repetitions that come up in any sequence or solo form. 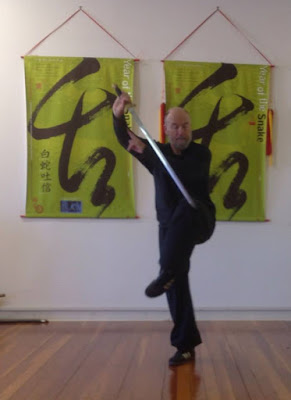 Some teachers have emphasized "Cloud Hands" for its overall healing abilities.  Professor Cheng Man-ch'ing stressed the importance of "Step Back to Chase the Monkey Away" for its ability to open the leg meridians and energy routes, and release and relax  the muscles in the lower body to experience the full circulation of blood and ch'i , a goal of Taoist Alchemy.  Master T.T. Liang always extolled the virtues of "Parting the Wild Horses Mane" for its health giving benefits, and calming effect to the emotions. Master Liang also emphasizing the practical application of the posture "Roll Back" which he said contained half the mastery of the self defense aspects of Tai Chi. 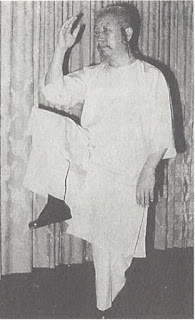 For me, after two decades of teaching Tai Chi full time, I emphasize the posture "Golden Rooster" in my personal practice as well as in my teaching and sharing.  In this three part blog I hope to share with you the experience, history, lineage, benefits, and insights from not only my own experience, but from previous masters, fellow teachers, and a multitude of students.

Golden Rooster, commonly known as "Golden Rooster Stands on One Leg" has a more complete name which is," the golden rooster stands on one leg to announce the dawn."  In the Western Mystery Traditions the rooster is a metaphor for enlightenment.  When the rooster sees the first rays of light in the morning,he stands on one leg to announce to the world the light has come.  In the Eastern movement and martial arts traditions, all birds are renowned and imitated for their ability to stand on one leg in perfect balance.  Indeed we hear of the"three treasures of balance" which are the head, pelvis, and foot, lined up in a relaxed, perfect manner. These three pieces give many treasures among which are balance, rooting, and the ability to relax muscles as you strengthen bones.

Not only does the constant practiced of golden rooster improve your balance, it gives amazing flexibility and strength to your lower body.  Its practice will help you with all the standing, balancing, stepping, kicking, and rooting which we find throughout all Tai Chi sequences, routines, and solo forms.  But, I learned that it has an even deeper and most important benefit for all of us concerning health.

I have a student, who underwent three breast cancer operations.  I've seen her return to class as soon as she was able to leave the hospital.  Her amazing healing energy, resilience, and belief and knowledge that Tai Chi is beneficial to her, has been an encouragement to us all.  She told me that her Dr. showed her an exercise which he wanted her to do to help circulate and pump out her lymphatic system.  He had her stand on one leg and alternately lift her right hand and a left knee, and then her left hand and  right knee.  He told her this would help pump out the lymph glands in her neck,armpit,and groin.  He said the body is the pump for the lymph system, and gentle, rhythmic movement, expanding and contracting, opening and closing, will assist in this process.  She asked if she could lift the same arm and leg and get the same benefit.  He said yes.  She said good that's the posture golden rooster which I do in my Tai Chi classes all the time! 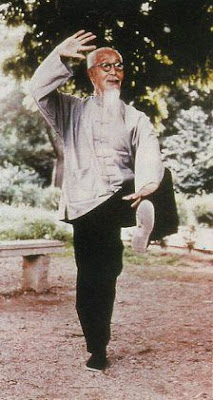 I have another student, Mike Cain, who teaches Tai Chi in Rochester, Minnesota.  His personal training includes choosing a posture to do 72 times a day, for one year.  Last year he completed one year of golden roosters without missing a single day!  I asked him to make a report of his experience, which he freely shared with me, and with all of you here.( Mike's wife Kim, who helps teach in Rochester, is now three months into her year of golden roosters!) Here is Mike's report:

"The first major observation prior to embarking on a daily ritual of 72 Golden Roosters is: what have I signed up for?!?!

In actuality, it took only about a week or so before it was “relatively” easy to do 72 roosters in a row. The second major observation: after a few days, one realizes that “start together / stop together” is easy to say and hard to do. When it comes to a seemingly easy posture such as the Golden Rooster, there is more than meets the eye. Upon closer inspection, there are many moving parts and variables — not to mention trying to stand on one leg without tensing up or out, and thus tipping over in the process.

Settling into a daily routine, I realized that the rooster has many lessons to share. The first of which is, it makes almost every posture-to-posture transition in the solo form easier, more relaxed and balanced. Another major lesson is that the posture “rooster" has a built in alarm, much like the actual rooster. After a few thousand iterations, it becomes easy to daydream. It’s also is easy to fall over. This in turn immediately reminds the sloppy practitioner that “moving meditation” does not mean sleep walking. The good news is that, while elegant in its motion, the Golden Rooster provides many opportunities to be single minded, which in turn provides a wonderful mental break.

From a physical standpoint, I noticed that performing tens of thousands of roosters have made my old ankles and hips feel more robust and capable, as well as virtually eliminating the morning aches and pains. From a mental perspective, I realized that it was possible to “forgive” a poor iteration of the posture and immediately focus on addressing the issue in the next iteration. A long series of the same posture provides a unique opportunity to fail and fix in a short amount of time. From a spiritual perspective, I had several opportunities to understand why the posture is called “golden rooster”. When performing the rare perfect pose, I felt like a proud and energetic bird.

And finally, it is indeed possible to perform 72 nearly flawless roosters in a Boeing 777 lavatory flying at 35,000 feet over the Pacific ocean!" 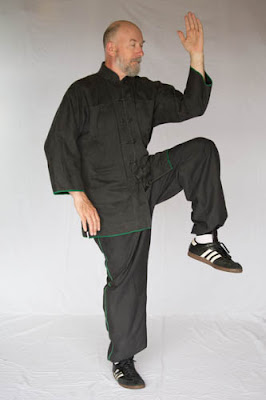 Next blog I will introduce you to an amazing story of a Taoist hermit, who was one of Master T. T. Liang's teachers in Taiwan, and our connection to and the teachings from that  accomplished, old Immortal!