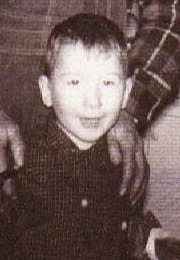 The first two bullies in my life were my father and my brother. My father used yelling, anger, slaps, trips, and occasional punches to give pain and get my attention. He was very strong and liked to use his finger to jab me, which felt like a spike especially to an eight-year-old boy. I remember one time when I was four years old, I had an ear infection and I was on the couch being cradled by my sister and crying from the pain. My father loomed over me, screaming for me to stop crying, slapping me in the head and shouting at me saying “if you don't stop crying I'll give you something to cry about." My sister was yelling at him saying he does have something to cry about, he has an ear infection and we need to take him to the hospital.


My brother was mean and hurtful before he left for Vietnam. When he came back he was relentless. He would punch me, pinch me, pull my hair, and make me cry, which would shame me in front of everybody. He would jump at me when I walked by and I was always tense and on edge when he was around. Sometimes he’d be talking, then jump out of his chair and tackle me and tickle me so roughly that I would have bruises. He would verbally abuse me and criticize me, and point out to anybody who would listen that I was putting on weight and that I needed a bra. One time when I was in the bathroom he posted his Doberman pincher outside the door and told the dog to guard the door. Every time I tried to leave the bathroom, the dog would snarl and snap at me. I was only rescued when an adult needed to use the bathroom. What I never understood was that my mother allowed these two grown men to bully and abuse me and would only intervene when I was either really crying hard or in noticeable and extreme pain. It wasn’t bullying, it was boys being boys I guess.

I began martial arts training at my allergist’s suggestion. I wanted to, not just because it was the Bruce Lee/ David Carradine craze or to improve my health, but really because I wanted to defend myself from these two abusers. I wanted to learn how to hurt them. Of course I never thought of them as abusers or their treatment of me as abuse, maybe because they were family. I never thought of my father as a bully, just mean.  I did think of my brother as a bully. When I would learn martial arts I only had two opponents in my own life. They were the ones I researched how I could defend myself from and what I could do to hurt them, to cripple them, to even kill them, to get them to stop or to defend myself when they confronted me. And yet I never considered telling anybody, talking to someone, that I was being abused. We never use the words abuse or abused. In those days you just didn’t say anything. So I trained my martial arts diligently, consistently, and with deadly seriousness.

The day came when I had many years of training under my belt, no pun intended, and I was strong. Scary strong. I was working driving a produce truck and throwing boxes of fruit and vegetables around all day long and training martial arts every night. Weekends were marathon training sessions. No girls. No beer. No fun. Except martial arts fun. I slept four hours a night and practiced tung-sze kung. One day when I went to the house, my father and I got into a confrontation and my father began to verbally bully me and tried to intimidate me physically by stepping into my space. I angled my body slightly, looked him in the eye and said "let's go.” I saw my father hesitate, and then for the first time in my life, I saw doubt in his face. And then he did what all bullies do when facing real resistance. He caved. He walked away saying "the day I can’t beat one of my kids with my fists is the day I get a gun and shoot them." I took that as a full victory and never backed down from him again. The day he died was the day I stopped training martial arts to hurt people and begin training for my own well-being and peace of mind.

Like all bullies, my brother kept an eye on my martial arts progress, sizing up his victim, and was always wary and on guard around me. It's a good thing because I was always on guard around him, ready to unload and go to any extreme. He quickly stopped putting his hands on me and later when he became a broken-down, over-weight, has-been bully, I actually regretted not having it out with him when he was in his full prime and a worthy opponent.He's not dead, just dead to me.

As I said, because they were family I basically rolled over and played dead to these two bullies. I did have a third bully in my life. He was my classmate in fifth grade. A lot bigger than me, and with my asthma, he was also a lot stronger and healthier than me. He would also physically abuse me and verbally abuse me all under the guise of being my "friend." One day out on the playground at recess he wrestled me to the ground, which he done many times, and tickled me violently, which can truly be a form of torture when you don't want to be tickled. I was a weak little boy. I could not resist. This day, a Friday, I will never forget it. After he had me on the ground, he reached between my legs and grabbed one of my testicles, and began to squeeze. It was excruciating. I was both writhing in pain and paralyzed at the same time. I begged him to stop and he wouldn't. To make it worse in my eleven-year-old world, four girls were watching the whole proceeding and I was mortified to think that they saw him squeezing one of my balls. He was laughing and experimenting with various pressures and at one point I thought I was going to pass out. The girls were laughing too. I was in agony both physically and emotionally. Only the bell ringing stopped his rampage of my being.

That whole weekend I stewed over it. I was angry and ashamed and then an ice cold feeling of vengeance came upon me. I didn't care if he was bigger than me or that he would beat me to a pulp when I took my revenge. He had accomplished what my father and brother had started. He had destroyed me and there was no one left. I decided the first thing I would do when I saw him Monday morning was to punch him in the head as hard as I could.

The whole weekend I thought about it, visualized it, and even practiced it. For once I couldn't wait to go to school! As soon as I got in the hall and I saw him standing at his locker. I went over to him with full intention in my stride. When he saw me he smiled, that smile of knowing, like he got away with the craziest thing with me and now our relationship has truly changed. He started laughing and said hi to me and that's when I hauled back and I hit him as hard as I could. He was able to turn his head but I caught him full in the ear and it smashed his head against the locker. I braced myself for his return onslaught. He was big, he was strong, and he was used to hurting me. It never came. He sat down and held his ear and said “what did you do that for?” He started to cry a little. I said it was for what you did to me on Friday. He gave the most cowardly answer he could, “I didn't mean to hurt you, I was just playing around."

Bullying equals abuse and needs to be looked at that way, felt that way, and spoken about that way until we stop bullying on all levels. With the new bullying law in Minnesota and all the different social and psychological ideas about how to handle bullies, in my personal experience, the only way to handle a bully is head on...