Decipher;
Succeed in understanding, interpreting, or identifying (something)
-from the Oxford dictionary

In a previous blog (7/18/'17) I gave an introduction to the theory of the "Three Centers." This was to help students understand the practises and strategies of the three main internal martial arts, Hsing-Yi Chuan, Ba-Gua Chang, and Tai-Chi Chuan. I've had 7 teachers of Pa-Kua, 7 teachers of Hsing-Yi, and 6 teachers of Tai-Chi. After 40 years of learning and practicing these three arts, and many others, I'd like to share my ideas of the three centers more fully.

I learned Wu-Dang Sword fencing from Master T.T. Liang and Grandmaster Wai-lun Choi. Liang taught a traditional 6 sets of two-person fencing forms while Choi taught 13 techniques, with two-person drills and sensitivity, for free-style fencing.Both approaches used the circular footwork of Pa-Kua, the whole body power of Hsing-Yi, and the sensitivity of Tai-Chi.

I learned the 12 Animals and Loi Hong Bat Sai of Luk Hop Bat Fat from the lineage holder, Grandmaster Wai-lun Choi. I started the Main Form years ago, and am now back to learning that from Master Choi. I found that Liu Ho Pa Fa had techniques from the three main internal styles, as well as techniques from Shao-Lin and  other external styles. It also contains extensive Taoist Internal training methods, meditation,and qi-gong.

Yi-Chuan and Standing Meditation I have learned from 7 teachers, the most detailed and in depth study being with Master Wai-lun Choi.

I am currently cataloguing and organizing my study of the "Choi Method," the master's key to internal martial arts. This method is from Master Choi's 60 years of martial arts study and his experiences as a full-contact fighting champion, and a full time professional teacher. The Choi method simplifies and makes accessible the practises necessary for developing the internal connections and external harmonies in all martial arts, especially the soft, internal styles. 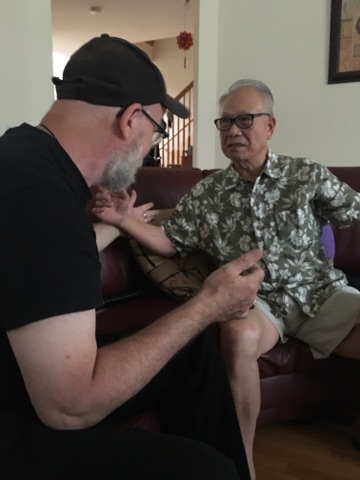 From my practice and teaching, I've updated the old saying which went;