My guest blogger is John Stitely, a long time martial artist, researcher, and 7th generation Yang Style Disciple. John is helping me archive and present the various histories of our lineages and helping with the 2nd edition of Real Gold, my book about the teachings of Grandmaster Wai-lun Choi.. Stay tuned, but for now, enjoy! Thank you John! 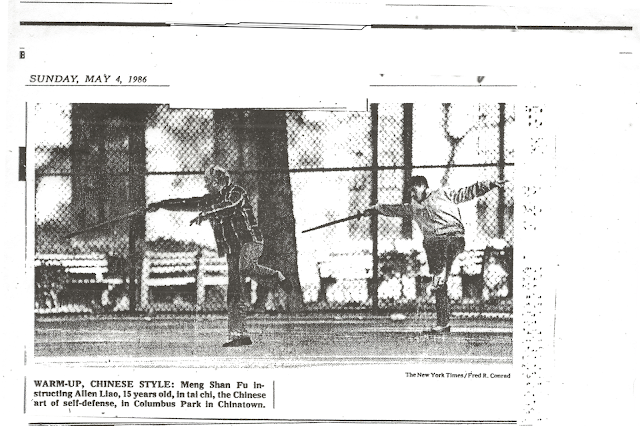 by John Stitely with tutelage and supervision of Sifu Ray Hayward

The cane form taught by Master T. T. Liang comes from a Shaolin form taught by  Master Meng Shan Fu,   Meng Shan Fu had been Master Liang’s class mate while he studied with Master Hsiang Yan  Hou.  Meng Shan Fu was a high ranked Police officer.  This  cane form had become part of the curriculum for the Taiwan Police in use of the police baton.
In 1980  Master  T. T. Liang, the senior disciple of Cheng Man Ch’ing,  was teaching in Boston.   Liang was aware of the cane  form which was used for training of the Taiwan Police. Meng was living in New York at the time.  Master Liang invited Meng Shan Fu to come to his school and teach his cane form.  He consented to do so.
Fairly early on, Sifu Meng opined that Liang was too old to learn this form and asked him to leave.  This is odd since it was Liang's school and he was  in excellent health, practising the entire Tai Chi system that he taught for at least two hours every day.  Nevertheless, Liang  demurred, but took his student, Ray Hayward aside and directed him to learn very carefully and then meet with Liang later to teach it to him.
Sifu Hayward recounts that this was an intense experience.  There was the pressure of not letting down his instructor.  Master Liang could be a demanding teacher who expected a high standard.   Liang would question Hayward carefully on details and occasionally demand  if he was sure that  a particular  technique had been recounted correctly, as his own analysis  made him question certain details. This became a detailed lesson for Sifu Hayward in how to both learn and analyse a martial art  form  In this manner Liang  learned the form.  After he learned it, Master Liang modified it, making it “Tai Chi’s way”.The result of this was the deep education of the nature of the system by  showing Sifu Hayward how to apply Tai Chi theories and principles to this Shaolin based form  as Liang adjusted details in the the form and  created  the Tai Chi Cane form.
This event appears not to have been entirely unique.  Some years later Sifu Hayward had a visiting Hsing Yi practitioner ask him if he would like to see the Hsing Yi Cane form, which, of course, he did.  As the man proceeded to perform, it was apparent that it  was the same form modified for Hsing Yi principles.