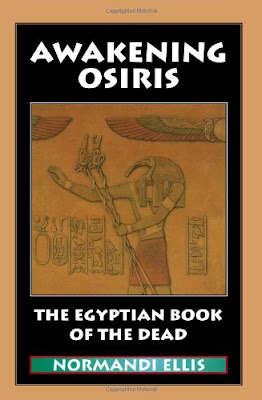 Well, I just finished Awakening Osiris by Normandi Ellis. It took me over two years! No, I'm not a slow reader, nor was it a major tome. It was just one of the deepest, most rewarding reads I've had in a good long time.

I saw this book on my friend Rob's coffee table. I had read some quotes and my Druid Course from OBOD had suggested it, but I never got around to reading it. I had read a rather dry and scholarly Egytian Book of the Dead, and when I finished, I never looked back. This time it was different.

When I picked up Ellis' version, the first thing I read was ,

"I am the sojourner destined to walk a thousand years until I arrive at myself."

That struck such a deep chord in my heart. It spoke to a feeling deep inside me. I read here and there and each passage spoke directly to me and my life so far. I ordered the book and dug in, but it was a slow slog. I tried to breeze through but I was stopped all along the way with insights, confirmations, and guidance. Here is one that both taught and confirmed so much for me at this time,

"The god you seek is within. The truth you chase lies between your own eyebrows. Look again with a different eye."

Reading I found the roots of all the Western Mysteries like Alchemy, Astral Projection, Kabbalah, Knights Templar, and Freemasonry. I saw the foundations of Judaism, Christianity, and Islam. I found my Golden Egg meditation as well as many that coincide with the Taoist Small Heavenly Circle meditation. Shape-shifting, animal lore, and elemental lessons were revealed in those pages.

I have immense gratitude to the translator, Normandi Ellis, who channeled more than translated these ancient lessons and ideas. Her spiritual approach made the lesson come alive and be present for me at a time where my own exploration and work are all inward directed.

If you've read this, read it again. If you haven't, you are in for a spiritual treat!