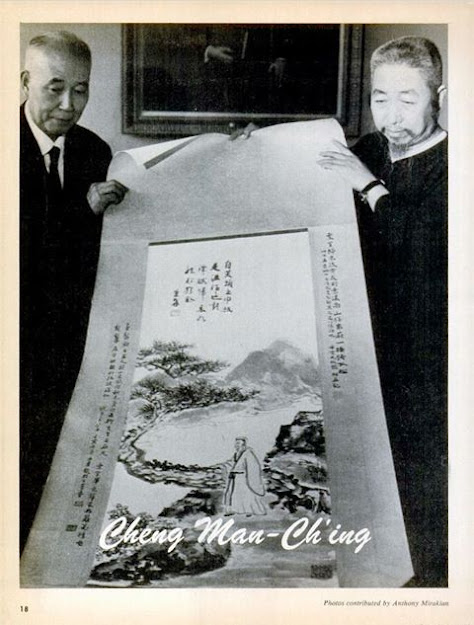 Professor Cheng Man-ch"ing, assisted by his senior student and translator T.T. Liang, gave a demonstration of Chinese painting and Tai-Chi at Springfield College in 1966. The Professor had just  arrived in New York to officially introduce Tai-Chi and Chinese culture to the U.N. Professor Cheng had also been invited to the White House to present two paintings to President Johnson, both of which hung in the White House on display. Professor Cheng also opened a school for painting, calligraphy, herbal healing, and Tai-Chi in New York City.

At Springfield College, the Professor showed some of his paintings and calligraphy, and then show some solo form. He then went on to give the majority of the demonstration, which was Tai-Chi as a martial art. The majority of the audience was martial artists and they wanted to see how Tai-Chi was used for self-defense.  The Professor demonstrated grab escapes, slipping punches, sticky hands,rooting, neutralizing, and Fa-Jing. Master Liang was in the role of M.C. and translator.

One of the amazing things is that the Professor simply called people out of the audience to grab, punch, and strike him! No rehearsing, no students making the master look good, no jumping, nothing! How many Tai-Chi demos have you seen with long parts of the form done, maybe some weapons or pushing-hands, and all done "in house." All very safe and clean. Not this one! It's one reason for the lack of polish, the lack of clean technique,yet it's all real.

When we see a technique demonstrated and it is clean and correct, that is to show the effectiveness of  that technique. When we see someone demonstrating with a compliant, passive uke or opponent, that shows ideas, possibilities, follow-ups, and counters. When we see someone defend themselves in an unscripted, free-style situation, with a resisting, changing, thinking, reacting, adapting partner, that shows skill. Many times we confuse the effectiveness of the technique demonstrated with the skill of the demonstrator. Then we are surprised and disappointed when a "master" is easily defeated in a live-time, free-style situation. For this reason, Master Liang had me and my classmates spar in our private classes.

I remember one demonstration where Master T.T. Liang was demonstration Rooting, Receiving Energy, and Pushing-Hands with a student. A man came out of the audience and said it was fake and that Liang's student wasn't pushing very hard. Master Liang said "Come on, try to push me over." That guy tried with all his might to move Liang. He failed miserably. Later Master Liang said, "That man pushed me like hell! Oh so strong, he really tried to knock me down. But I have a root!"

My big brother, Master Paul Gallagher was at that Springfield demo and told me a few amazing things. Paul told me that everyone in the audience was some kind of martial artist and many were high ranking black belts. He said everyone was talking in groups when suddenly everyone turned to the door as Prof Cheng was walking in the room. Paul said Cheng's presence was palpable and drew everybody towards him. He said when he shook the Professor's hand it was completely empty, absent of all tension or feeling. He also said when the people were punching at Cheng, they were trying to hit him in the head! And the guys pushing were really pushing hard. He also remembered how dapper and polite Mr. Liang was to everyone.

How I came to having a copy of the movie is pretty amazing. I was introduced to Sensei Anthony  Mirakian, then an 8th degree black belt in Goju Ryu Karate, back in the early 1980s. He had his own dojo in Watertown MA and had studied in Okinawa. He also checked out lots of Chinese martial arts and knew about Professor Cheng Man-ch'ing from a trip to Taiwan in the 1950s.  In the Summer of 1984, right before I moved from Boston to Minneapolis, Sensei Mirakian invited me to his dojo and gave me three unbelievable gifts.

The first gift "Tony" gave me was to have his senior students assembled there, and treated me to a demonstration of his complete style of Goju Ryu Karate! He showed forms, fighting, training, everything from white belt to black belt and beyond! And he answered any and all of my questions. That lasted about four hours. The second gift he gave me was a copy of the Springfield College demo movie, in Super 8! He told me that the man who was pushing Professor Cheng was his first black belt. The third gift he gave me was the enormous respect he showed me then and always. Pretty good for a "wet behind the ears kid!"

I have only shared this movie with my disciples and with the late Robert W. Smith, my pen pal big brother. Now, on the launch day of my Patreon page, I'm sharing it with the world. Enjoy!