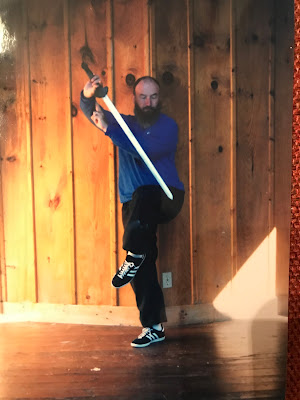 Thursday night, June 28, 2001. Warm Springs Lodge, Pennsylvania. We were sitting downstairs in the basement prepared for our first night of the annual Tai-Chi retreat. There was a muted excitement among the attendees. People checked and double checked their cameras. The excitement was over a shrouded box standing in the corner of the room. Inside that box was a sword. Not just any sword. This was a sword approximately 150 years old from the late Ching Dynasty. This was a sword used as a real weapon, its center of gravity being the center rather than at the hilt. This was a sword that saying with an indescribable energy when you pulled out of the sheath. This was the blue copper sword as the characters on the blade and noted. More than that, this was "Ray's sword."

Since my beginnings at Diane Cannon's Ming Tao studio in Delaware, I have always heard the phrase "Ray's sword" in passing. On my first retreat, Ray would joke about Diane getting him "his sword" this year. On Ray's visit in November, we drove up to Chinatown to eat and visit "his sword." He would look at it through the glass. The shopkeeper would allow him to hold and even on sheath it. Ray smiled ear to ear as he ran through some postures, then with a sigh would hand the sword back to the shopkeeper and comment that he would be back next year. And this is how it was for the three years I have known Ray. This was our routine when he visited Delaware. From what I gathered, this was a routine much longer than three years old. It had achieved mythical proportions.

Diane mentioned that Ray's 25th Tai-Chi anniversary will be coming up in the next year. This set a string of events into action. With the combined efforts of our local Tai-Chi contingency and the Twin Cities studio we were soon driving up to Philly to purchase "Ray's sword." We brought it back to Delaware and stared at it for a while as if a seven year quest was finally fulfilled. A group of diligent workers constructed a display box for the weapon. Don lent his artistic talents and created a work of art out of the bleached wood. When the retreat finally arrived, we snuck it into the basement and waited for the night to begin.

Ray came in and sat down in the only empty chair, position conveniently to keep his back to the covered box propped in the corner. After handing out the agenda and some general introductions, Ray open the floor to stories and questions. Diane stood up and congratulated him on his upcoming 25th anniversary. People shuffled in their seats. Diane led him to the box. Flashes powered up. I think his first reaction when he saw the sword was somewhere between disbelief and total surprise. He finally opened the box and took it out among the flashes and the wir of cameras. He thanked  everyone repeatedly. He let everyone hold it. He was touched. The true testament of how touched he was came over the time of the retreat. He always carried it with him, sometimes to dinner. When we held our classes, he had it near him. In the open time between the classes, you might catch a glimpse  of him in a more secluded area of the Lodge practicing the sword form- always with a smile. It was the first thing he showed Master Liang on our annual visit.

There are very few times in one's life when you can touch the core of another's. Thursday night was one of those nights.