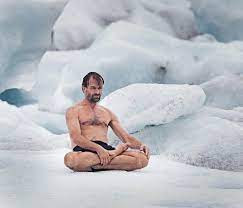 “Cold is my warm friend.”

I first heard about the Wim Hof Method from my friend Rob Jones. Rob and I have been sharing many different aspects of martial arts, meditation, and healing for years. Rob mentioned that he and his colleagues were practicing the Wim Hof Method and he sent a link to a documentary on Wim Hof.

I watched the documentary on the “Iceman” and at first, I was not impressed. Although Wim Hof was in buckets of ice, swimming under the Arctic Circle, and doing all kinds of things out in the snow and cold and just in shorts, I had seen different martial arts masters and spiritual people who were able to stay warm and heat their bodies in the cold. But then I saw something truly spectacular. I saw Wim Hof running a marathon in the desert without drinking water! I always heard that the highest level of internal control was being able to stay cool in the hot weather and warm in the cold weather. So now I decided to explore.

I signed up for Wim’s home study course which lasted for 10 weeks. The lessons covered the three aspects of Wim Hof’s method which are breathing technique, cold immersion, and mindset. The course had a nice gradual pace. The breath holds were a new aspect to all the various breathing techniques I’ve been doing for years. The cold however, really sucked! Not only did I hate the feeling of the cold, but I had had all the negative aspects of cold drilled into me through martial arts teachers, acupuncturists, other various tradition Asian healing modalities, and my grandmother!

I can say that the mental training came into play each time I wanted to take a cold shower or a cold bath. Even when I began to acclimate and it wasn’t so hard, or when I switched back and forth from warm to cold to warm again, it still was a mental challenge and struggle. Physically it took almost two months of cold training before I could turn from my chest to my back, in the cold water, without gasping or shuddering. I did notice that I gradually stopped shivering early on.  And that when I switched from warm to cold and back again, at some point they just became sensation.

Early in the course Wim said the whole key is to study the lights that were in your third eye when you are doing various holding of the breath and cold training. This was the sign that the parasympathetic nervous system was being accessed. I soon began noticing all kinds of lights and shapes, and during my other meditations and practices I became aware of lights and activity in my third eye.

I not only saw light, but I also saw tunnels, my seven chakras, runes, animals, faces, a Templar Cross, and an assortment of shapes and colors. By far the most amazing sight, which happened twice, was when a huge, brilliant ball of blazing white light opened in my third eye and expanded all the way through my consciousness!

I experienced extremes of heat and cold during my breath holds. Sometimes I had to rip my clothes off! Other times I had to run to the bathroom only to find out I didn’t have to go; I was just accessing my parasympathetic nervous system and it’s connections to my bodily functions. One time I had an instant and powerful erection that had nothing to do with any kind of sexual thoughts or feelings. In the early sessions I would spontaneously break into laughter, or cry and sob, again with no noticeable emotions connected to either.

Another aspect of the Wim Hof training was to perform push-ups after the breath technique and after your last exhalation. Basically, seeing how many push-ups you could do on empty lungs. I’ve always hated push-ups and could do very few. With this method of supercharging your cells with oxygen, I was able to do over 50 push-ups at a time.

I did start to notice that in the colder weather I stayed warm without having to put on as many layers as I use to. And that actually I stayed cooler in the hot weather. I went into Lake Superior in Winter and exposed my skin to many levels of below zero weather while living in Duluth MN.

Working on breath holds after exhaling, I was able to get to over two minutes regularly. I now get to three minutes after my last exhalation, and even passed the four-minute mark, all effortlessly. Doing this kind of breath hold, basically with empty lungs, gave me insight into the Sufi teaching “Die Before You Die.” As the last thing we will do is exhale, it is interesting to contemplate death and beyond while your body is signaling you for survival and life.

I also researched the breath techniques of Stig Severinsen, four-time world freediving champion and Guinness World Record holder for various breath holds. He gave a three-part technique for holding breath, either with full or empty lungs, which made holding much easier. They also gave me a physical practice for three of the lessons and teachings I have been working on for years.

Stig’s suggestion is that when you hold your breath, you consciously do three things:

Not only did this help with my breath holds, but it also tied into my Taoist meditation, Traditional Chinese Medicine, and my Druid studies. Here are the three:

I also explored other breathing and holding methods from many Western and Eastern Traditions. I use the Wim Hof Method as my solid foundation, especially for the cold exposure. I would highly recommend Wim’s method. Some of my students have also embraced the cold! Below is a short reading list to help you on your breath journey.

“All the world’s light cannot be compared to the brightness of a single ray of your own inner light.”

Science of Breath by Swami Rama 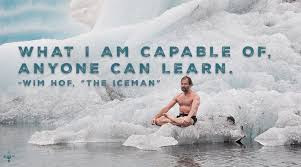